Wouldn’t it be great if you could get the best compute power from your render farm whilst reducing your costs to update and maintain them?

Their OCtoPus range is a new generation of servers based on the OCP (Open Compute Project) that provides a wide range of 21’’ servers optimised to take advantage of the latest in data center and HPC cooling technologies.

What is the OCP (Open Compute Project)?

As a platinum member of the OCP community, 2CRSi designs a wide range of OCP compliant solutions for servers, data storage, rack enclosures amongst other technologies needed for today's energy-efficient data centers.

OCtoPus servers by 2CRSi - A mix of insights & innovation

Designed for optimal heat dissipation, all OCtoPus server configurations can be adapted to our three cooling systems:

OCtoPus 1.8 - One node and eight GPUs

The OCtoPus was created in 2017 while we were trying to improve the efficiency of a standard OCP cluster. In addition to all the developments around the servers, we rethought the implementation of fans and power supply at the rack level.

We chose to aggregate all the fans at the rear of the rack, to add smart control of the fans speed and to monitor the power distribution. These developments made it possible to reduce power consumption by 23%.

By mutualizing fans at the back of the rack, we were able to reduce power consumption and include a control manager that adapts the fan speed to the temperature of the servers.

Optimized air cooling increases the air flow and heat dissipation inside the servers, so space is optimized for component management. The failure rate and intervention time are reduced thanks to the centralized power supply of the servers by busbars and shared ventilation.

Air cooling is not efficient enough to support ultra-high density. With this in mind, we adapted direct liquid cooling to our air-cooling rack: specific higher power server components such as CPUs and GPUs are exposed to liquid in order to be cooled more efficiently than air cooling. The highest performance servers can be integrated efficiently using this approach.

Our DLC rack includes manifolds with double shut-off valves to ensure hot-swappable liquid distribution to the servers at the rear of the rack. In addition to the DLC, 9 fans ensure to keep the remaining components cool to avoid SPOFs (Single Point Of Failure).

In order to meet the growing need for very high performance and high-density servers, we have designed the hybrid racks with direct liquid cooling of processors and GPUs.

The most power-hungry and particularly heated components are exposed to a liquid circuit in order to be cooled more efficiently than by air cooling.

Immersion Cooling - Get to the highest level of cooling

To go further in energy saving and performance, 2CRSI develops solutions with immersion cooling. Servers are submerged in tanks filled with a non- conductive fluid which cools all the components down, allowing to reach the highest level of data center efficiency.

Thanks to immersion, servers do not need fans to be cooled anymore and data centers no longer need to invest in expensive and inefficient air con- ditioning systems. At the scale of a datacenter, this represents 25% savings on the implemen- tation of a datacenter (CAPEX) and 40% on its operating costs (OPEX).

Immersion cooling is a sustainable choice: life of the components is extended, energy consumption is reduced and the heat generated can be reused.

To push back the limits of energy saving and performance, 2CRSI develops immersion cooling solutions. Servers are immersed in tanks filled with a non-conductive fluid that cools all components. This technology allows a data center to achieve the best possible energy performance by reducing the floor space used.

As an indication, the surface area required for a set of 200 racks in air cooling is approximately 1000m2. At equivalent power, with immersion cooling, the requirement is only 20 racks, which represents a total surface area of 30m2.

Founded in Strasbourg (France), the 2CRSi group develops, produces, and sells ultra-high-performance customised environmentally-friendly servers. In 2018, 2CRSi generated a turnover multiplied by 2.1 to 65 M €. With the integration of Boston Limited acquired in November 2019, the Group has 320 employees and the offer of innovative solutions (processing, storage, and networking) is now distributed in more than 45 countries. 2CRSi has been listed since June 2018 on the regulated market of Euronext in Paris (ISIN Code: FR0013341781).

What is the OCP (Open Compute Project) and who is it for?

As a platinum member of the OCP community, 2CRSi designs a wide range of OCP compliant solutions for servers, data storage, rack enclosures amongst other technologies needed for today's energy-efficient data centers. 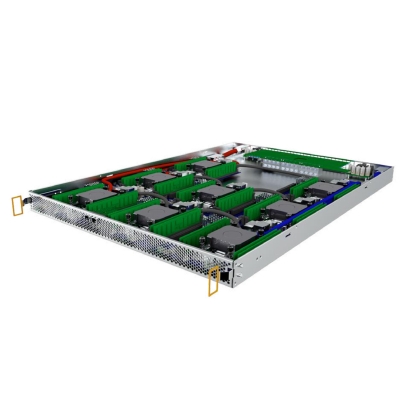